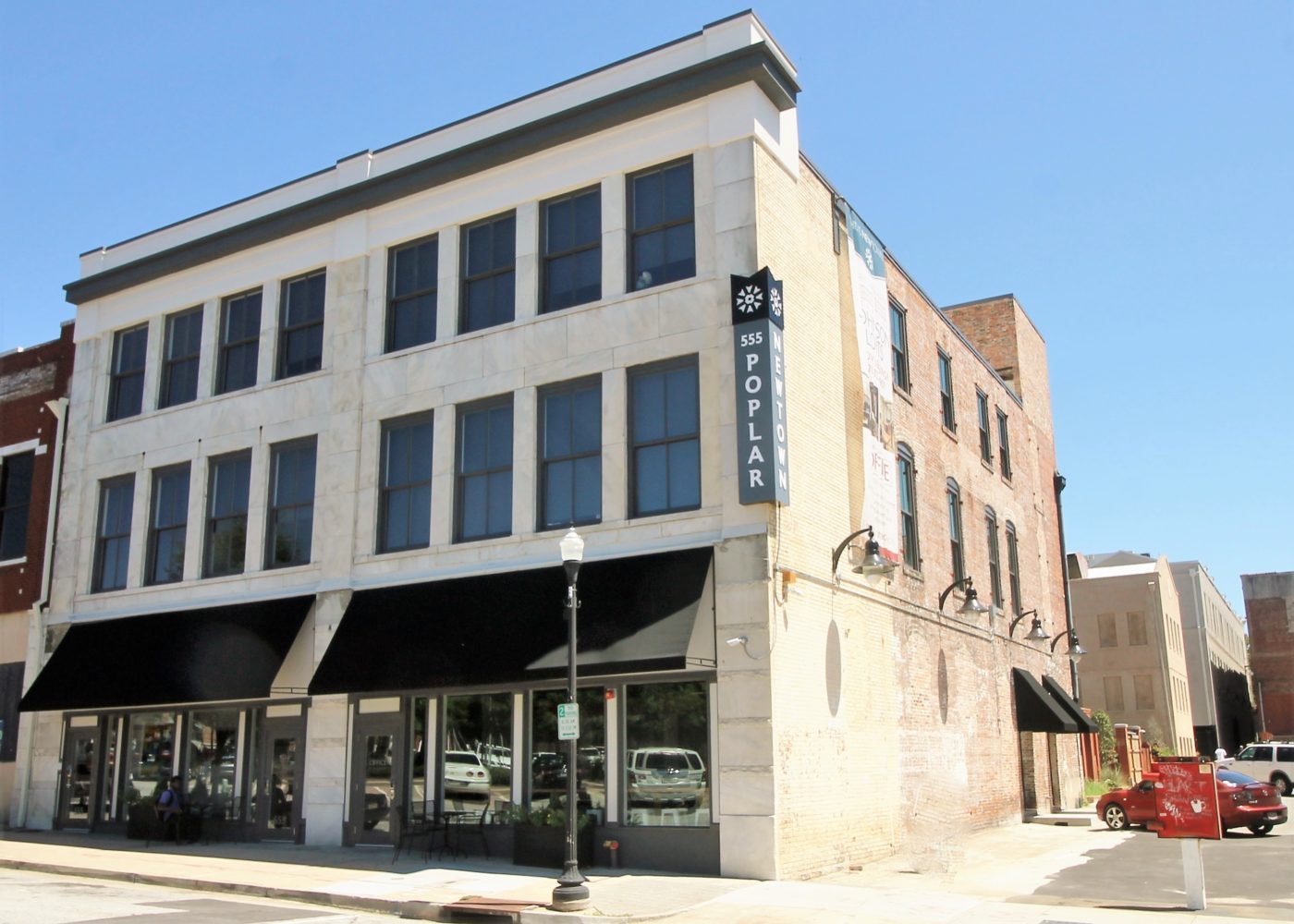 In 2016, NewTown Macon completed a $2 million rehabilitation of the historic building at 555 Poplar St. as a comprehensive exhibition of our mission in action. The property includes NewTown’s headquarters on the first floor, along with The Office, a modern shared-work space. The top two floors contain twelve luxury apartments, known as Johnson Lofts. Rents from The Office and Johnson Lofts support NewTown’s mission.

View the floor plans below or view photos and details of each individual loft on our Loft Finder.

Apply online if you would like to lease one of the lofts. Email johnsonlofts@newtownmacon.com to schedule a tour or call 478-722-9909. 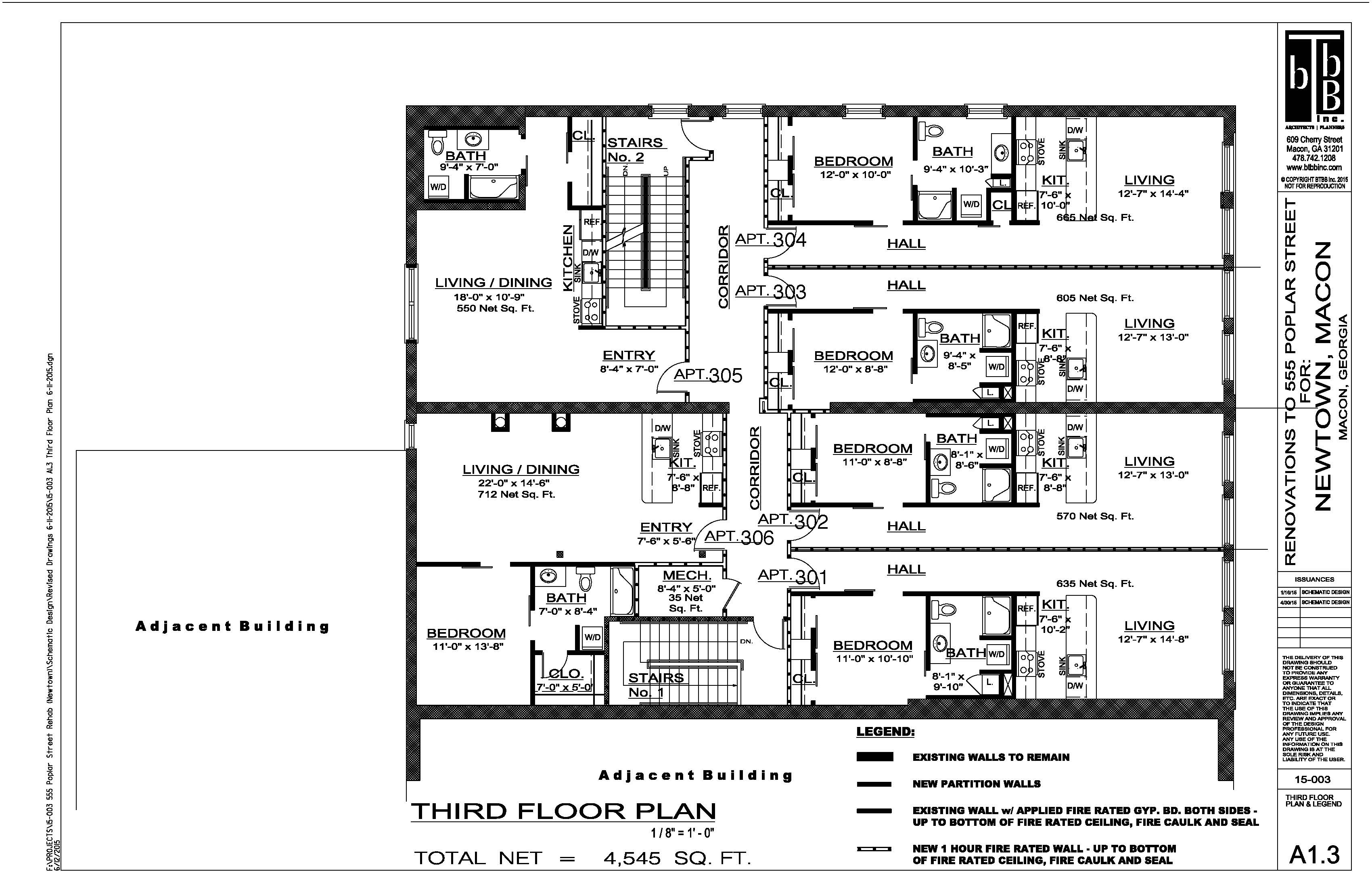 The building at 555 Poplar St. was constructed in 1908 for Johnson Brothers (from which the lofts take their name), the oldest furniture company in Macon at the time. 555 Poplar served as an expansion for the Johnson Brothers. The building is listed in the National Register of Historic Places as a contributing building to the Macon Historic District. In 1914, the Johnson Brothers moved to a larger space, and the S.S. Parmalee Company, a wagon maker, began using 555 Poplar St. as storage for their workshop at 559 Poplar St. P.D. Willingham Furniture Company is listed at 553-555 Poplar St. in 1917, and the Macon Chalmers Company, a truck dealer, occupied the space in 1918. By 1920, A.S. Hatcher Company had moved into 553-555 Poplar St. to sell automobiles, and in 1922, the Carter Farm Implement and Motor Company had moved into the building. Although the Carter store changed into a hardware and supply company by 1925 and the Georgia Market House moved into one side of the building in 1934, the Carter company stayed in the building until 1937. In 1939 and 1940, Farmer’s Hardware and Supply operated from the structure, and from 1941 until 1950, Coley Hardware and Paint used the space. From 1951 until 1961, 555 Poplar St. returned to its historic use with Avery Johnson Furniture occupying the space. In 1962, Avery Johnson swapped to selling only TV’s and radios, and the store closed its Poplar St. location after 1963. The building was vacant from the next twenty years, before being used as a furniture store again by Hunt-Ragan and Marshall furniture companies between 1985 and 1990. 555 Poplar St. was vacant again until 2007 when Goodwill moved in for two years. Its last vacancy lasted until 2014 when Urban Development Concepts purchased the structure.</ahref=”https:>

The structure at 555 Poplar St. is a three story masonry structure with a cut stone veneer facade. It has two flat storefronts made of wood and plate glass. The facade faces southwest and has two bays, each of which has a storefront, and four 2-over-2 double hung sash windows on each of the second and third floors. The building’s roof rests directly on top of the third story window casings; interviews indicate the building may have had a fourth floor that was so severely damaged by a fire that it was removed. The building was then re-roofed on top of the third story, though documentary evidence of this fire could not be found. The southeastern elevation fronting Second Street Ln. shows the five course running bond and has eight boarded up windows along with six bricked in windows. This elevation also has two doors. The rear of the building has no exposed windows, though the elevator shaft extends about one-story’s height above the rest of the building on the northwestern corner. The first floor has the sheetrock walls,carpet, metal supporting beams, and bathrooms installed by Goodwill in 2007, while the second and third floors retain their original narrow plank heart pine floors and and small spots of plaster along with the exposed masonry walls. Many original beams are in place on the second and third floors, but some have been replaced due to the fire. The structure also retains the original arches between what was once 553 and 555 Poplar St. on the second and third floors and an elevator shaft.

As part of NewTown’s 2012 strategic plan, we promised to increase occupancy in three target blocks from 50% to 75% in five years. We then set to work building by building to solve the obstacles to redevelopment. 555 Poplar is in one of our target blocks and was languishing in foreclosure in dilapidated condition, near collapse. After attempting to match the building up with potential private developers failed, NewTown began to consider an unprecedented move: buying the building out of foreclosure and developing it ourselves. This strategy had several advantages:

The project was financed with a combination of loans from BB&T and NewTown’s Real Estate Development Loan Fund and proceeds from syndicating state and federal tax credits for historic preservation. The rehabilitation involved extensive emergency structural stabilization and installation of all new plumbing, electrical and mechanical systems throughout the building. On the exterior, a new front parapet was constructed to bring the building back to its original proportions. The second and third floors were reconfigured into nine one-bedroom loft apartments and three studio loft apartments. The apartments feature large historic windows, custom subway tile showers, engineered hardwood floors, granite countertops, stainless steel appliances, gas stoves and washer and dryers in every unit. Piedmont Construction served as construction manager for the project. Piedmont and many of the subcontractors donated materials and labor to finish the first floor as The Office and NewTown’s headquarters. The workspace features large expanses of transparent glass, a gathering kitchen at the front of the building, two conference rooms, four private offices for coworking tenants and coworking work stations.