“The impressive usage of this pop-up bike network really shows what’s possible when you tap into the community and can help inspire other cities and towns looking to boost physical activity among residents.” Madeline Burke-Vigeland, Excellence awards Jury Member

An independent jury, with the Center for Active Design, recognized seven exemplary winners from around the world that demonstrate innovative design projects and research studies leveraging buildings, streets, and neighborhoods to support healthy and engaged communities.

“Over the five years since CfAD was launched, we’ve seen a shift in the demand for healthy communities that is now being led by the residents and employees within our communities,” says Joanna Frank, President & CEO, Center for Active Design, “As is evidenced by this year’s winners, cities, real estate developers, businesses, and designers are meeting this demand by prioritizing health within their respective industries.”

How can Macon residents better connect to one another and the places that they want to go? What makes Maconites feel connected? What makes them feel disconnected? How can we test out residents’ ideas for improving connectivity in Macon?

In October 2015, Knight Foundation launched a nationwide competition for the best ideas to improve cities.

We assembled a team, led by NewTown Macon in partnership with Macon-Bibb County (including Macon Urban Development Authority and Main Street Macon), and Bike Walk Macon. We also teamed up with 8 80 Cities and Better Block, who provided community engagement and prototyping services, respectively.

We submitted an idea to engage the city in a conversation about improving connectivity in Macon, and then to test out those ideas on the streets of Macon. This included building a pop-up bike network throughout the urban core, also known as a “minimum grid”. Out of over 4,500 applications, 32 ideas were selected to be funded, including Macon Connects.

In June of 2016, we held a three-day Ideas Festival consisting of 19 events that appealed to a wide range of audiences. With over 1,100 attendees, there were 430 active participants who generated over 3,400 ideas.

As Downtown Macon continues to attract more residents, businesses, and investment, safe biking and walking infrastructure are critical to increasing access to, from, and throughout the urban core.

We heard loud and clear that residents wanted more mobility options in Macon. Driving is the most convenient mode of transportation in the city. Despite relatively good driving conditions, residents want to rely less on the car and have other means of transportation available to them. As Downtown Macon continues to attract more residents, businesses, and investment, safe biking and walking infrastructure are critical to increasing access to, from, and throughout the urban core. 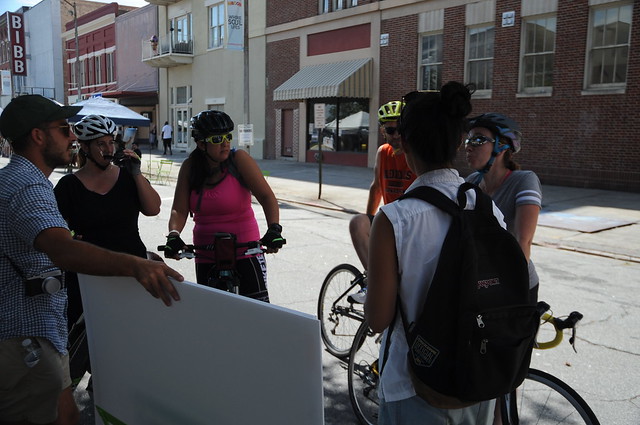 Macon Connects proved that if you build it (a bike network), they will ride. Bike counts along the pop-up network were 9.5 times (854%) higher during Macon Connects as compared to “normal conditions” when there is no bike infrastructure present. Along the four corridors where we placed bike counters, bike counts increased from as little as 5.5 times (456%) to as much as 18.6 times (1758%).

We also found out that 71% of respondents support building a protected bike network in Macon. Of those who had the chance to ride the pop-up bike network, 88% agreed that it inspired them to bike more.

A positive spillover effect of the bike lanes was that it created new opportunities for residents to enjoy their own city. 68% reported visiting an area that they normally do not go to. 75% reported seeing new shops and/or amenities along the pop-up bike lane network that they had never noticed before. Looking at the drastic increase in bike counts during Macon Connects Street Makeover, we know for a fact that Macon residents will take advantage of a safe, connective bike network if it is available to them.

Project Partners
MACON CONNECTS is made possible thanks to its hard-working team of partners, including: NewTown Macon, Macon-Bibb County, Better Block, and 8 80 Cities.